What is Replacement Theology?

Replacement Theology is the notion that the covenant God made with Abraham and the Jewish people has been nullified by God and now belongs to Gentile Christians. Thus, in this view, the Church has replaced Israel as the chosen people of God. Other terms for Replacement Theology are Triumphalism (the Gentile Church has triumphed over her Jewish spiritual fathers) and Supersessionism (The Gentile Church has superseded Israel and the Jewish people).

Paul the Apostle Warned Us about Replacement Theology

Paul the Jewish Apostle specifically warned Gentile Christians in his letter to the Romans about the disastrous consequences of boasting that Gentiles somehow replace Jews:

I ask then: Did God reject his people? By no means! I am an Israelite myself, a descendant of Abraham, from the tribe of Benjamin. God did not reject his people, whom he foreknew.” (Romans 11:1-2)

“For if the firstfruit is holy, the lump is also holy; and if the root is holy, so are the branches. And if some of the branches were broken off, and you, being a wild olive tree, were grafted in among them, and with them became a partaker of the root and fatness of the olive tree, do not boast against the branches. But if you do boast, remember that you do not support the root, but the root supports you. You will say then, ‘Branches were broken off that I might be grafted in.’ Well said. Because of unbelief they were broken off, and you stand by faith. Do not be haughty, but fear. For if God did not spare the natural branches, He may not spare you either. (Romans 11:16-21, NKJV).

Speaking to Gentile Christians, Paul warns them not to feel superior. Abrahams’s faith is like the root of a productive tree and the Jewish people are the tree’s natural branches. Because of faithlessness, the Jews were the broken branches. Gentile believers have been grafted into the tree like a wild olive shoot. Both Jews and Gentiles share the tree’s nourishment based on faith in God. – explanation taken from the Life Application Study Bible by Tyndale publishing.

Replacement Theology began with the church fathers around the time of Justin Martyr (ca. A.D. 160). Until that time, the church had seen itself as an extension of 'Israel,' or the Jewish people.

In his day, Justin Martyr began sowing the heretical seeds of separation. In his book, Dialogue with Trypho, a Jew, Justin argues that whatever used to belong to Israel has now become the property of gentile Christians. He concludes that the Gentiles are now the new Israel and the Jews are to be separated from Christians—even from God Himself. The coming church fathers would build upon this teaching. At its core, this new doctrine of the church was motivated by gentile triumphal arrogance—not Scripture. The heretical doctrine of Replacement Theology or Triumphalism builds upon the idea that the Jewish people and the nation of Israel are inferior and must be replaced with something greater—the gentile Christian church.

“There is no sneer too mean, no gibe too bitter for him to fling at the Jewish people….They are become worse than the wild beasts, and for no reason at all, with their own hands they murder their own offspring, to worship the avenging devils who are the foes of our life…The synagogues of the Jews are the homes of idolatry and devils, even though they have no images in them. They are worse even than heathen circuses…I hate the Jews for they have the law and they insult it.”

“Yes, you Jews. I say, do I address you; you, who till this very day, deny the Son of God. How long, poor wretches, will ye not believe the truth? Truly I doubt whether a Jew can be really human…I lead out from its den a monstrous animal, and show it as a laughing stock in the amphitheater of the world, in the sight of all people. I bring thee forward, thou Jew, thou brute beast, in the sight of all men.” 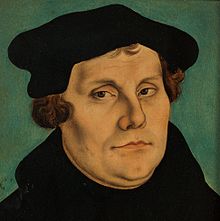 “What shall we Christians do with this damned, rejected race of Jews? Since they live among us and we know about their lying and blasphemy and cursing, we cannot tolerate them if we do not wish to share in their lies, curses, and blasphemy….We must prayerfully and reverentially practice a merciful severity…

First, their synagogues should be set on fire, and whatever does not burn up should be covered over spread over with dirt so that no one may ever be able to see a cinder or stone of it. And this ought to be done for the name of God and of Christianity in order that God may see that we are Christians, and that we have not wittingly tolerated or approved of such public lying, cursing, and blaspheming of His Son and His Christians.

Secondly, their homes should likewise be broken down and destroyed.

Thirdly, they should be deprived of their prayer books and Talmud’s.

Fourthly, their rabbis must be forbidden under threat of death to teach any more.

Even if they were punished in the most gruesome manner that the streets ran with their blood, that their dead would be counted, not in the hundred thousands, but in the millions, still they must insist on being right even if after these 1,500 years they were in misery another 1,500 years, still God must be a liar and they must be correct. In sum, they are the devil’s children, damned to hell.”

Not surprisingly, Martin Luther’s ideas concerning the Jews were quoted in Adolph Hitler’s book, Mein Kampf, as a basis of support for his antagonism against them.  Replacement Theology was proclaimed in church pulpits across Europe centuries before Hitler’s rise to power.  When He did come to power Hitler had a long line of church leaders willing to stand with him to bring the final separation between the gentile church and Jews.  The Holocaust was the natural result of the practice of Replacement Theology throughout church history.

Replacement Theology is in Vogue Once Again

Replacement Theology, for the most part, became dormant after the Holocaust but has made a daring comeback in theological institutions and churches today. The majority of churches in England have adopted a theology of replacement and American mainline and Evangelical churches are following their lead.

What Can I Do About It?

You can help educate yourself and others about Replacement Theology and the dangers it poses to increasing anti-Semitism and condoning violence.

The History of Replacement Theology

According to Marvin R. Wilson in his book Our Father Abraham: Jewish Roots of the Christian Faith:

“By the time of Justin Martyr a new attitude prevailed in the Church, evidenced by its appropriating the title 'Israel' for itself. Until this time the Church had defined itself more in terms of continuity with the Jewish people; that is, it was an extension of Israel. There was a growing awareness, however, that the Synagogue was firm in its stance that Jesus was not the Messiah of Israel, and that on this point the Synagogue was not going to change its mind. The realization of this impasse gradually drew the Church to define itself in terms of discontinuity with—indeed, as the replacement of—Israel. To this point not only had Jewish Christians considered themselves part of the national body of Israel, but so too had gentile believers. They saw themselves as grafted into Israel, as part of a believing remnant within Israel, not those who had usurped the place of Israel, not as a separate people independent of Israel. Therefore, as long as the Church had a reasonable balance of Jews and gentiles in the same body, there was no tendency to take over the term Israel. But by Justin’s time that balance had been lost.

Though the break between Synagogue and Church had now essentially been made, the struggle between the two was far from over. A triumphalistic and arrogant Church, largely gentile in makeup, would now become more and more de-Judaized—severed from its Jewish roots. This de-Judaizing developed into a history of anti-Judaism, a travesty which has extended from the second century to the present day."