Aaron David Fruh, President of Israel Team, attended a White House briefing this past week, just a few days before Purim 2020. The briefing dealt with antisemitism and the dismantling of the Iran Nuclear Deal.  This unholy deal, hatched in the minds of the former American Presidential Administration, would have given Iran the ability to build a nuclear weapon which they would have certainly used to wipe Israel off the map as their leaders promised.  America not only gave them the clearance to go nuclear, but also paid them $150 billion to finance their terror campaign against the Jewish State.

Aaron wrote the following article five years ago about the horror this deal would have unleashed upon the world and the intricate connections the deal had with the book of Esther and the Feast of Purim.  Aaron was privileged to be at the White House this week just before Purim to see firsthand how this horrible policy is being changed.  The White House briefing was “off the record”, so all he can report is that the dismantling of this very bad deal is, in his words, “of an extreme supernatural nature!”  As we celebrate the Jewish Feast of Purim in 2020, let’s thank God that He has once again turned the tables and set the Jewish people free from destruction! Happy Purim! 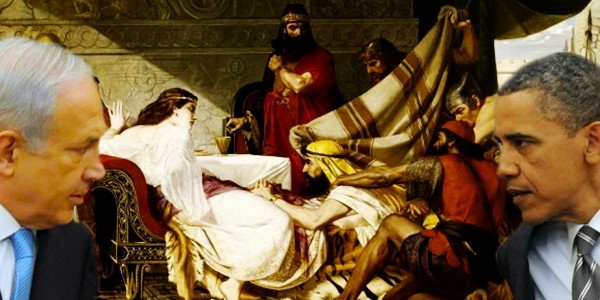 Insanity is no respecter of persons, nations, or terrorists regimes. Those of us still retaining a bit of our senses in a world turned upside down are puzzled why the most powerful man in the world would feel the urge to bow in surrender to the nuclear-weapon demands of the demented poor souls of the world's most deadly, sociopathic and bloodthirsty (in a literal sense) terrorist regime, Iran. It kind of adds a whole new bizarre and twisted logic to President Obama's desperate yearning for gun control.

The Iranian regime has earned the reputation of being the No. 1 state sponsor of terrorism in the world – nothing to be proud of among civilized human beings, but who's judging? Unfortunately, very few, especially in the levels of American leadership that can and should make a difference in the safety of our long-term ally, Israel. Three critical factors are at the heart of the nuclear deal between America and Iran: Iran's ambition to "wipe Israel off the map" (their own admission), an American president who has made an agreement with an anti-Semitic Iranian empire determined to annihilate Jews, and a Jewish prime minister by the name of Benjamin. In a surreal twist, it's all happened before – every bit of it – in another time and reality.

First, a bit of history. The book of Esther in the Bible is the story of a jealous anti-Semitic politician who convinces a nation that the Jewish people are worthy of destroying. This politician named Haman used the strategy of delegitimization and demonization to prove the Jews were an existential threat to the future of the empire he served, Persia (coincidentally, modern-day Iran). Haman was not a Persian but rather an Amalekite. This non-Persian Amalekite made an alliance with the king of Persia to annihilate the Jewish people. The Amalekites attacked Israel in their wilderness journey after their exodus from Egypt. Joshua fought back while Aaron and Hur held up the hands of Moses. After the Hebrews defeated Amalek, God proclaimed to Moses: "… the Lord has sworn: the Lord will have war with Amalek from generation to generation" (Exodus 17:16). This has proven true. The brooding and hateful power of Amalek (call it a spirit of Jewish hatred if you want) has always had its Hamans. A person doesn't have to search very deeply in Jewish history to find those inspired by Amalek.

During the time of Haman's rise to power in Persia, the queen of the empire was a Jewish woman named Esther. Many Jews lived within the 127 provinces of Persia. She was warned by her uncle Mordecai, a Jew from the tribe of Benjamin, that Haman had made an deal with the king of Persia (Iran) to literally wipe the Jews off the map. Haman despised the Benjamite Mordecai because he would not bow and submit to him publicly. Seething with anger, Haman gave his allegiance to and negotiated with the king of Persia and promised he would bring thousands of talents of silver into the empire's treasuries if he were allowed to exterminate the Jews. Inspired by money, the king of Persia entered into an alliance with Haman and gave him his signet ring to make the Jewish death deal official. If this weren't bad enough, inspired by his wife and friends, Haman built a gallows 50 cubits high on which to hang Mordecai the Benjamite Jew.

After hearing the warning of her people's destruction, Esther sent word to Mordecai that it was against protocol for her to speak to the king without an invitation. She asked the Jewish people to fast and pray with her three days, after which she would make her appeal, stating: "If I perish, I perish." She cared more for her people than she did for her own life. Are there any similarities between Haman, Persia, Mordecai and Esther of old and the modern-day relationship between the American President Barrack Obama and the Israeli Prime Minister Benjamin Netanyahu? Can history repeat itself? You be the judge. Consider these facts:

Aaron Fruh is President of Israel Team Advocates International. He is the author of "The Forgotten Blessing," "The Decree of Esther" and "Two Minute Warning: Why It's Time to Honor Jewish People Before the Clock Runs Out" (co-written with Bill McCartney of Promise Keepers).